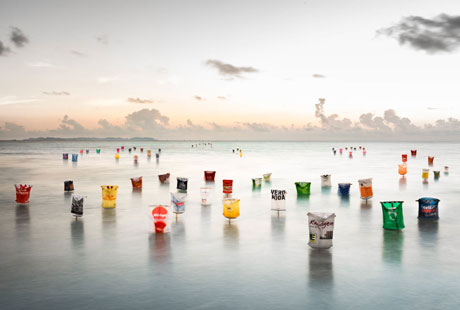 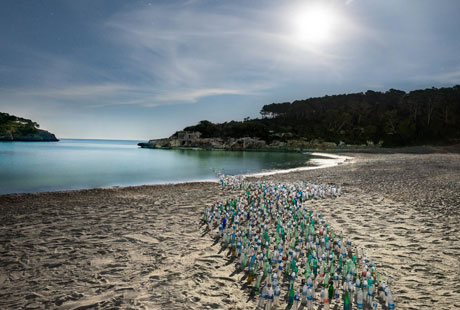 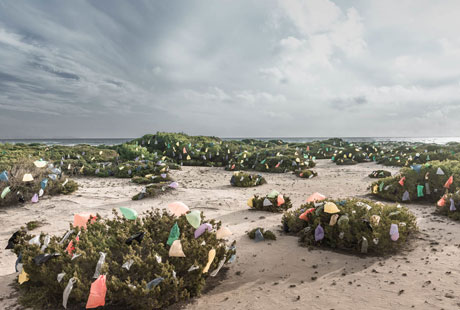 
"Plastic Army", by German photographer Dirk Krüll is a project about the plastic pollution. Plastic Pollution (the accumulation of plastic objects in the Earth's environment that adversely affects wildlife, wildlife habitat and humans) is one of the most urgent problems of the present.

The multi-awarded series is a kind of land-art project and shows beautifult landscapes with artistical placed plastic objects (like plastic bottles, plastic bags or plastic bottle caps) - in a very esthetic way. On first view you see the lovely landscape, only on second view one realizes the plastic pollution, the "plastic army invasion" that unsceasingly conquers the world.

Dirk Krüll was born in Düsseldorf. He studied at the academy of arts in Hamburg and the former Folkwang School (GHS Essen) and worked for several important magazines in Germany as well as some international publishers.
As a fine art photographer he specializes in social themes. These are, among others, the environmental pollution, the effects of industrial work in the Ruhr Area, in the former GDR as well as in China and Mongolia.
His work has been awarded with several prizes, scholarships and exhibitions and can be found in several permanent museum-collections.

Dirk Krüll is member of the association of Düsseldorf artists, the German Association for Photography (DGPH) and represented in the photographer agency Laif. His studio is located in Düsseldorf, Germany, Capital of the state North Rhine Westphalia.

Find more information about the artist on his Website dirk-kruell.de